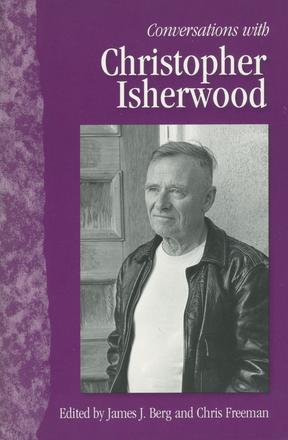 To many readers Christopher Isherwood means Berlin. The author of Goodbye to Berlin (1939), the British Isherwood found fame through the adaptation of that work into the stage play and film I Am a Camera and then into the stage musical and film Cabaret.

Throughout his career he was a keen observer, always seemingly in the right place at the right time. Whether in Berlin in the 1930s or in Los Angeles in the 1960s and 1970s, Isherwood (1904--86) reflected on his life and his world and wrote perceptive commentary on contemporary European and American history and culture. His ties to California made him more American than British.

"I have spent half my life in the United States," he said. "Los Angeles is a great place for feeling at home because everybody's from someplace else. "

Isherwood can be credited for helping make L. A. an acceptable setting for serious fiction, paving the way for John Rechy, Joan Didion, Paul Monette, and Bernard Cooper, among others.

The interviews in this volume--two of which have never before been published--stretch over a period of forty years. They address a wide range of topics, including the importance of diary-keeping to his life and work; the interplay between fiction and autobiography; his turning from Christianity to Hinduism; his circle of friends, including W. H. Auden, Aldous Huxley, and E. M. Forster; several important places in his life--Berlin, England, and California; and his homosexual identity.

These interviews are substantive, smart, and insightful, allowing the author to discuss his approach to writing of both fiction and nonfiction. "More and more," he explains, "writing is appearing to me as a kind of self-analysis, a finding-out of something about myself and about the past and about what life is like, as far as I'm concerned: who I am, who these people are, what it's all about. "

This emphasis on self-discovery comes as no surprise from a writer who mined his own diaries and experiences for inspiration. As an interviewee, Isherwood is introspective, thoughtful, and humorous.

James J. Berg is the program director for the Center for Teaching and Learning, Minnesota State Colleges and Universities. Chris Freeman is an assistant professor of English at St. John's University. Berg and Freeman are editors of The Isherwood Century: Essays on the Life and Work of Christopher Isherwood, which was a finalist for the 2001 Lambda Literary Award for Gay Studies.