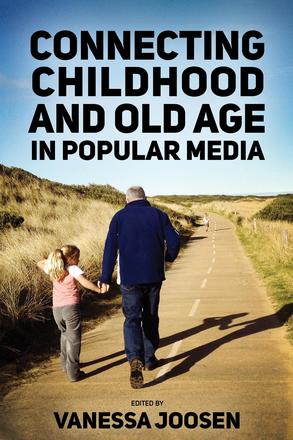 Penetrating analysis of what it means in literature, film, animation, and advertising to act your age, or not

Media narratives in popular culture often assign interchangeable characteristics to childhood and old age, presuming a resemblance between children and the elderly. These designations in media can have far-reaching repercussions in shaping not only language, but also cognitive activity and behavior. The meaning attached to biological, numerical age—even the mere fact that we calculate a numerical age at all—is culturally determined, as is the way people “act their age. ”

With populations aging all around the world, awareness of intergenerational relationships and associations surrounding old age is becoming urgent. Connecting Childhood and Old Age in Popular Media caters to this urgency and contributes to age literacy by supplying insights into the connection between childhood and senescence to show that people are aged by culture.

Treating classic stories like the Brothers Grimm's fairy tales and Heidi; pop culture hits like The Simpsons and Mad Men; and international productions, such as Turkish television cartoons and South Korean films, contributors explore the recurrent idea that “children are like old people,” as well as other relationships between children and elderly characters as constructed in literature and media from the mid-nineteenth century to the present. This volume deals with fiction and analyzes language as well as verbally sparse, visual productions, including children's literature, film, television, animation, and advertising.

"This engaging volume challenges the stereotypes often associated with the elderly and with notions of childhood. The articles are a wonderful collection from international scholars from Eastern nations—Japan, South Korea, and Taiwan—as well as from the West—Holland, the United States, Belgium, and France. It features intercultural perspectives—fairy tales/folktales, children's books, television, film, and advertising; and contemporary popular culture (television series such as The Simpsons and Mad Men, which are familiar to English-speaking audiences); as well as classical texts, like Johanna Spyri's Heidi and Japanese fairy tales—demonstrating a wide scope. This gathering looks at intergenerational bonding, the way different cultures treat aging; rather than presenting old age as fixed and unchanging, it features the complexity of each stage of life. And the writing is inviting, scholarly, and readerly. "

- Roni Natov, professor of English at Brooklyn College of the City University of New York and author of The Poetics of Childhood

"Historically and geographically wide-ranging, these groundbreaking essays astutely explore the global assumption that children and old people share similar deficiencies. The collection is a timely intervention into discussions of intergenerational relationships and ageism that will be of great interest to scholars and others engaged in cultural studies, children's literature and age studies. "