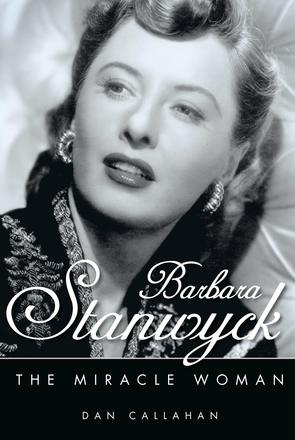 A biography of the savvy, sexy, and inspirationally hardworking actress

Barbara Stanwyck (1907-1990) rose from the ranks of chorus girl to become one of Hollywood's most talented leading women-and America's highest paid woman in the mid-1940s. Shuttled among foster homes as a child, she took a number of low-wage jobs while she determinedly made the connections that landed her in successful Broadway productions. Stanwyck then acted in a stream of high-quality films from the 1930s through the 1950s. Directors such as Cecil B. DeMille, Fritz Lang, and Frank Capra treasured her particular magic. A four-time Academy Award nominee, winner of three Emmys and a Golden Globe, she was honored with a Lifetime Achievement Award by the Academy.

Dan Callahan considers both Stanwyck's life and her art, exploring her seminal collaborations with Capra in such great films as Ladies of Leisure, The Miracle Woman, and The Bitter Tea of General Yen; her Pre-Code movies Night Nurse and Baby Face; and her classic roles in Stella Dallas, Remember the Night, The Lady Eve, and Double Indemnity. After making more than eighty films in Hollywood, she revived her career by turning to television, where her role in the 1960s series The Big Valley renewed her immense popularity.

Callahan examines Stanwyck's career in relation to the directors she worked with and the genres she worked in, leading up to her late-career triumphs in two films directed by Douglas Sirk, All I Desire and There's Always Tomorrow, and two outrageous westerns, The Furies and Forty Guns. The book positions Stanwyck where she belongs-at the very top of her profession-and offers a close, sympathetic reading of her performances in all their range and complexity.

[Callahan's] critical analyses of her performances are not, thankfully, uncommitted, academic regurgitations of what others have written, but highly observant, passionately written considerations of her artistry… his biography proves once again that all great artists begin with life as it is lived, and it is to the author's credit as a biographer that we are made more aware of Barbara Stanwyck's ferocious determination to look at life honestly.

Callahan builds a compelling personal narrative out of her contradictions: her bootstrapping tough-broad self-sufficiency (this slum kid was a rabid Ayn Rand fan and loved her Westerns best of all), her self-effacing, almost masochistic love life, and her radical spontaneity on-screen.

Callahan soars when he takes aim at Stanwyck's acting and films, so much so that The Miracle Woman's primary value may be as a friendly reference book to pull off the shelf every time you see a Stanwyck picture and wish to hear an erudite, witty voice offer much more than two cents… Callahan writes of her with the ever-present respect one shows a great artist, and The Miracle Woman is brimming with penetrating observations…[his] writing is often humorously piquant, hitting the reader like a lime spritz in a margarita.

Anyone with a love for classic film history will find much to love and appreciate about this book.

Ideal for Stanwyck fans (so, everybody) and any cinephile who takes acting seriously.

An impassioned biography. Film scholar Dan Callahan [focuses] on what really interests him about his subject: not Tinseltown gossip, but what Stanwyck accomplished on screen… Callahan's enthusiasm informs every page.

If Mr. Callahan's book is not the last word on this great actress, it will certainly stand as an invaluable critical guide. It's a book that would have initially embarrassed its subject, if only because she would be uneasy about any book about herself. And then, as she thought about it, and maybe reread it, she would be just a little flattered, then, finally, pleased. And she would be right, as usual.

The arrival of this critical biography is an opportunity to marvel at the pure cumulative accomplishment of Barbara Stanwyck's career…Callahan epigrammatically notes the eternal human truths within Stanwyck's performances.

Mr. Callahan could be the best writer on film acting, certainly the best that I know of. As word gets around about his excellent new book, Barbara Stanwyck: The Miracle Woman I think most cinephiles will agree with me.

Long overdue and full of insight, a thorough, heartfelt, and beautifully researched account of the neglected career of one of the greatest stars in movie history.

- James Harvey, author of Romantic Comedy in Hollywood and Movie Love in the Fifties

From the sublime (The Lady Eve and Double Indemnity) to the outrageous (Forty Guns--'She's a high-ridin' woman with a whip!'), the workaday (The Woman in Red) to the why'd-she-make-it bizarre (Red Salute), Barbara Stanwyck possessed extraordinary range and a screen persona that was both tough and tender. Dan Callahan's marvelously detailed book brings this nimble, legendary star and her long, astonishingly varied career to radiant life.

- Ed Sikov, author of On Sunset Boulevard: The Life and Times of Billy Wilder; Dark Victory: The Life of Bette Davis; and others

Callahan's valuable reclamation project is a beautiful tribute to an actress celebrated for her naturalism…his assessments, both positive and negative, are always sensitively rendered, and he's keenly alert to the nuances he so treasures in her work…. Callahan not only gives Stanwyck her due, he may have you soon placing her above Kate or Bette as the foremost First Lady of the Screen.