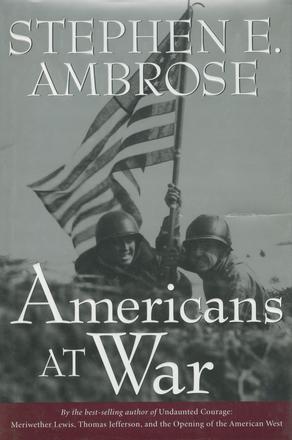 In the turbulent history of America each era has been delineated by a war. Although World War II has been the backdrop for most of his writing, perhaps no other historian has focused on modern America at war so strikingly as Stephen E. Ambrose.

In this fascinating collection of fifteen essays Ambrose ranges over the many wars that have enveloped Americans and depicts the personalities of American leaders during wartime: Custer, Eisenhower, Patton, MacArthur, Franklin Roosevelt, and Nixon. “All nations make war in their own way,” he says. “The American way is the theme of these essays. ”

Two large subjects encompass his research: First, he is fascinated by the experiences of those who have gone to war, both the leaders and the led, and, as he shows in “Just Dumb Luck: American Entry into World War II,” he is intrigued by men who make big decisions or fail to make them. Generals alone don’t win wars. The infantrymen, as he points out in “SIGINT: Deception and the Liberation of Western Europe,” were responsible for winning World War II, not those who were involved in intelligence operations. Soldiers who break under strain (“My Lai: Atrocities in Historical Perspective”) also get his fair and compassionate examination.

Although many of the pieces in this collection focus on World War II, Ambrose also explores the Civil War (“Struggle for Vicksburg: The Battles and Siege that Decided the Civil War”), the Vietnam War (an undertaking different from earlier American wars), and war in general—actual wars of the past as well as hypothetical wars (“War in the Twenty-first Century”). He includes one of quite recent times (“The Cold War in Perspective”) in which fighting was not confined to the battlefield.

Because democracies employ teamwork, he believes they are by far the most efficient governments for the fighting of war. Ambrose writes that on occasion he has changed his mind about certain big questions (“The Atomic Bomb and Its Consequences”). Should atomic bombs have been dropped on Japan? Changes of opinion, he says, come during research, one of the exciting features of studying history in a free country. “We change our minds when confronted with new evidence; they [Communist regimes] change their minds when confronted with a new dictator. ”

Ambrose has the gift of making history come alive. “If I told the story right, I could make them want to know. ” One reads his profiles and feels present as momentous issues are considered and decisions made. His descriptions of battles and maneuvers allow the reader to be a participant.

Other Books By Stephen E. Ambrose